Huawei Developer Conference 2020 officially opened today. At the conference, Wang Chenglu, President of Huawei’s consumer business software department, explained the full scene capabilities of Hongmeng OS 2.0 in detail, and officially released the whole series of emui 11 system. Emui 11 brings many art style subjects and DIY’s AOD in UX design, and introduces a more comprehensive “intelligent multi window”. At the same time, emui 11 provides users with a new audio-visual interactive experience in dynamic effect and multi sensory collaboration. Bring a mirror to the end of the transition dynamic effect, so that there is no sense of jumping regional sharing, more efficient operation

In multi screen collaboration, emui 11 can change one mobile phone into three, while watching video chat, while playing games. In addition, in PC and tablet collaboration, cross screen drag and drop can be realized, and the stylus can be used as a more convenient connection tool. At the same time, emui 11 can carry out cross-border communication of Changlian, and realize the personification interaction of IOT devices. For example, it can send messages to the smart screen to ask for hot movies, and the smart screen will feed back the information to the mobile device

From September 10, emui 11 will officially launch beta, including 10 models of P40, mate 30 and matepad Pro Series. In addition, Wang Chenglu announced that users who are the fastest to upgrade emui 11 will have the opportunity to get the experience qualification of Hongmeng OS 2.0 mobile phone version

On September 8, Xin xiaodai announced a high-profile transfer of “Chinese Koi” for 1 yuan, and said that he would take part in the variety show of “King”, a super anchor, to start a new career, attracting more than one million netizens’ attention. We all hope that we can become the “new Koi” after Xin xiaodai. In this way, we can not only get the houses with 70 years’ property rights in Hainan, but also more than 100 luxury gifts such as cars and computers

But then the dream of financial freedom was shattered by a statement from @ time stream studio. According to Xin xiaodai’s microblog content, the “new Koi” gift will be provided by the program super anchor king, and the microblog certification is time flow sound. However, according to the statement issued by time stream voice, Sina Weibo account @ super anchor King embezzles our company’s qualification for enterprise certification. At present, we have filed with the public security organ. Please @ super anchor King make rectification as soon as possible, and all programs of your company have nothing to do with our company

At present, xinxiaodai’s lucky draw microblog has been marked as “this content is an illegal lottery activity”, while @ super anchor King’s microblog account has been cancelled. As for why the company’s qualification of time stream sound was embezzled for microblog authentication, according to the daily economic news, the person in charge of time stream sound said that when communicating with king, the super anchor, the other party explained that they used the company’s qualification for microblog account authentication through an agent company The article “takeaway rider, trapped in the system” has aroused great social repercussions. However, hungry Yao, one of the takeaway giants, responded that it will set the button of “wait 5 minutes / 10 minutes more” for users to choose. Hungry Yao will provide users with red packets or beans and other feedback

On September 9, CCTV news microblog launched a survey on “is it useful to set up a five minute waiting function for the takeaway platform?”. At 18:43, 75% of the netizens voted for “no, the optimization algorithm of the platform is not a pot throwing consumer”. However, something magical happened. In a short period of time, the number of people who support the platform to set up the “five minutes more function” has increased rapidly and become the choice of “most people” 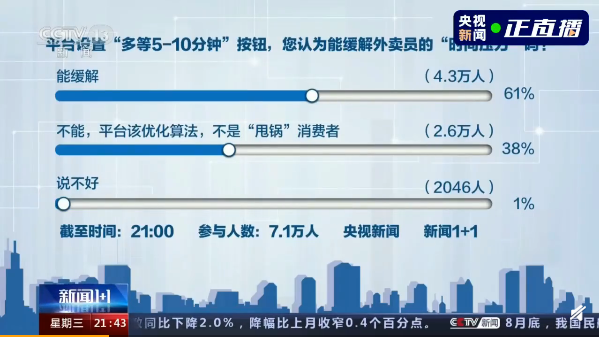