Now, xinxiaodai suddenly announced the transfer of “Chinese Koi” with 1 yuan on Weibo, and started a new career of variety show with goods, which instantly aroused thousands of waves. The daily economic news reporter noted that the “new Koi” will receive 137 prizes, including houses with 70 years of property rights in Hainan, as well as cars and computers

Today (September 8) early in the morning, the topic of Chen xinxiaodai’s one yuan transfer of Chinese Koi occupied the hot search of microblog, which caused many netizens’ onlookers and hot discussions

When it comes to “Xin xiaodai”, some people may not know. Set the clock back two years ago (October 2018). In a lucky draw of “global free gift package for Chinese Koi” participated by 3 million people, xinxiaodai (microblog user ID) stood out and became the “Chinese Koi” with thousands of unique favorites. Later, she bid farewell to her role as an IT engineer from nine to six, turned herself into a free experiencer of “one hundred million awards” and started a global journey. During this period, xinxiaodai not only had millions of fans, but also became an online celebrity favored by advertisers 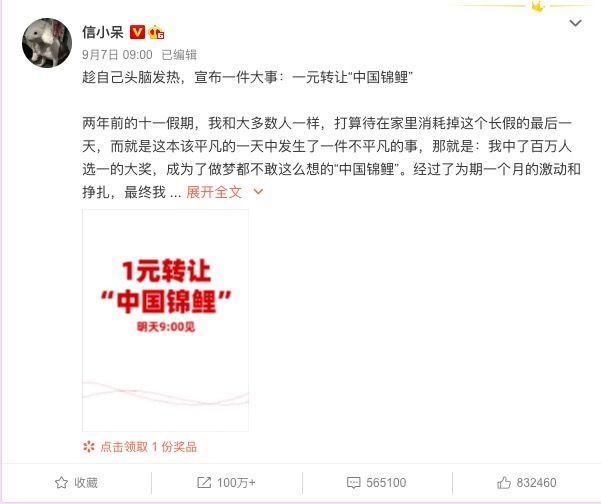 Now, xinxiaodai suddenly announced the transfer of “Chinese Koi” with 1 yuan on Weibo, and started a new career of variety show with goods, which instantly aroused thousands of waves. The daily economic news reporter noted that the “new Koi” will receive 137 prizes, including houses with 70 years of property rights in Hainan, as well as cars and computers

Xinxiaodai, a post-90s girl from Tianjin, has been to Japan, Thailand, Canada, Alaska, Australia and other places in the past two years after becoming a “Chinese Koi” she never dreamed of. She has also become a travel blogger who shares experiences and beautiful scenery

“For nearly two years, I have been honored as a” Chinese Koi “and my life has been” breathtaking. “. I have a brand new way of life. I’ve seen all kinds of scenery along the way. I’ve been looking for the meaning of travel, and at the same time I’ve got a deeper understanding of the word “life”, which is not a small word Xinxiaodai admitted in her open letter on Weibo that she has accumulated some wealth, but the 28 year old wants to take advantage of her youth to meet more unknown challenges

Therefore, “old Koi” Xin xiaodai decided to transfer “China Koi” by 1 yuan, and gave the baton of identity to “China new Koi in 2020”, implying that the prize of “new Koi” would surpass himself and realize financial freedom. Xin xiaodai’s move attracted many netizens to rub their hands

According to the rough statistics of the “new Koi” wealth and freedom prize form released by Xin xiaodai, the reporter found that there are many kinds of prizes, including a 70 year old house and a car in Hainan, as well as 137 prizes across the fields of snacks, home textiles, beauty and home electricity, such as computers, cameras and air conditioners 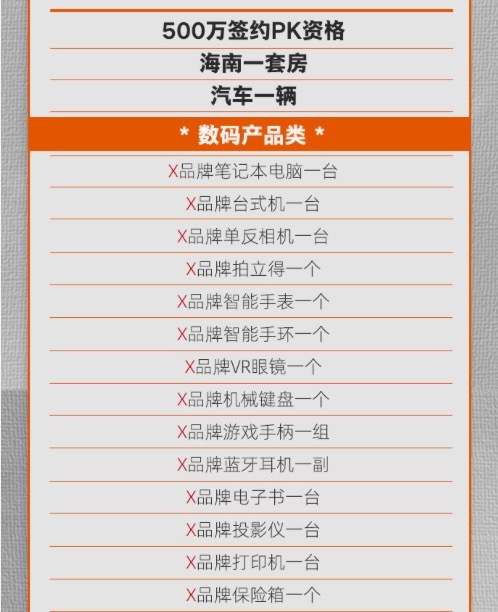 It is worth mentioning that the first prize is “5 million signing PK qualification”, which is also a pity. Along with the prize comes Xin xiaodai’s new career – “to participate in the world’s first anchor class large-scale talent show” super anchor king “, in order to achieve his dream of live delivery. The prize of “new Koi”, which has attracted much public attention, is provided by the program side and will start on October 1

“It turned out to be an advertisement” and “the marketing of this program is great”. Although netizens were a little surprised, they thought that after waiting for a long time, they were looking forward to the advertisement of xinxiaodai’s variety show. However, the program team specifically said that “if the new Koi has no intention of participating, it can get all the prizes except 5 million PK qualification”

Therefore, many netizens have indicated that they are willing to participate, “it doesn’t matter whether they are Chinese or not, they mainly dare to think”, “if you have a dream, it will come true” and “I have written my resignation letter”. As of about 18:00 on September 8, nearly 800000 people have forwarded xinxiaodai’s lucky draw microblog

Since the end of 2019, the prize of xinxiaodai koi is about to expire, and the news of leaving the post of “Chinese Koi” has been constantly emerging. Especially when this year’s epidemic strikes, xinxiaodai, the tourism blogger, seems to have become an ordinary girl again, so it’s reasonable to re plan her career

This time, relying on the gimmick of “1 yuan transfer of Chinese Koi”, Xin xiaodai and the variety show he will take part in really earn enough attention. But what is the future of variety show with goods 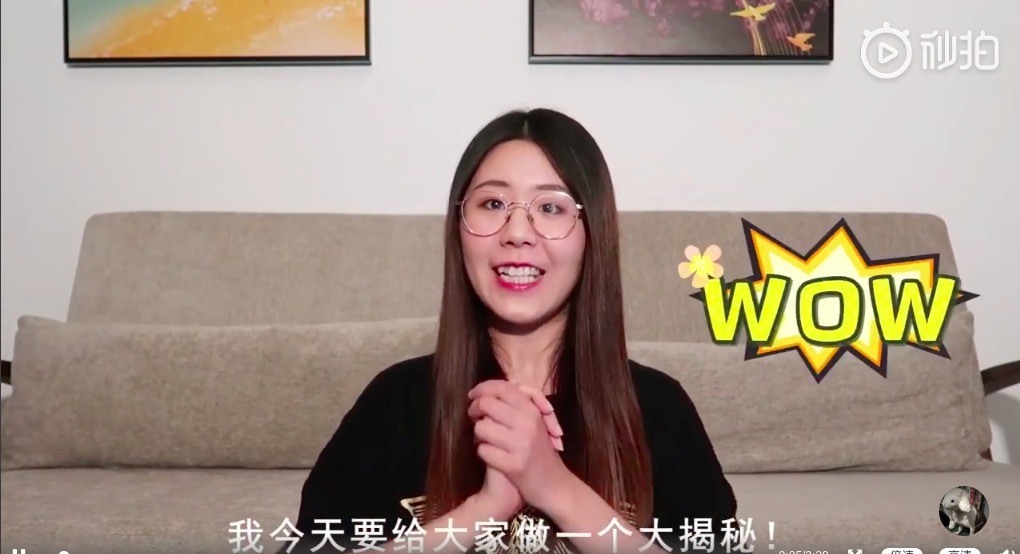